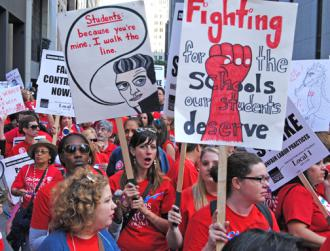 Join us for a discussion with Annie Tan, CORE Activist, Marilena Marchetti, former CORE member during the CTU strike, and Lauren Cohen of MORE (bios below).

RSVP on FB! Invite your friends and colleagues

How to Jump-Start Your Union: Lessons from the Chicago Teachers, a Labor Notes book, available from MORE $15 solidarity price,

Strike for America, by Micah Utrecht available in hard copy or ebook from:  versobooks.com/books/1569-strike-for-america

For a short introductions, please check out “Uncommon Core,” by Micah Utrecht at jacobinmag.com/2014/03/uncommon-core-chicago-teachers-union/ or “Creating a New Model of a Social Union: CORE and the Chicago Teachers Union” by Robert Barlett at monthlyreview.org/2013/06/01/creating-a-new-model-of-a-social-union/

Also, take a look at: http://monthlyreview.org/2013/06/01/the-chicago-teachers-strike-and-beyond/

and http://monthlyreview.org/2013/06/01/creating-a-new-model-of-a-social-union/ for some additional interesting strategic questions.

Marilena Marchetti is an occupational therapist. She was a member of CTU and CORE from 2011-2013. She began working for the NYC DOE in June, 2014 and is a new member of the UFT and MORE. She will be discussing her experience during the 2012 CTU strike.

Lauren Cohen has been teaching since 2005 and currently teaches at P.S. 321 in Park Slope. She ran on the MORE slate for Elementary Executive Board in the UFT election, and also for Executive board in the NYSUT elections, and she now serves as co-Chapter Leader for her school. She will be discussing the birth and development of CORE, and its successful election campaign in 2010, based on the book How to Jump Start your Union.

Annie Tan was born and raised in NYC, but has lived and worked in Chicago since 2011. After a stint as a charter school teacher and a paraprofessional, she joined the CTU in 2013 and has been an active member of CORE. She will be discussing CORE’s activity since the strike, its structure, and contrasts between the NYC and Chicago unions.

CORE 2 years after being founded had a way to reach into probably 75% or more of the schools for the 2010 election. How did that happen? They had people sending in reports on where they stood in each school. They ran in the pension election 7 months before the big election. Why? How did they win those seats being such a new group? In other words – was there anything about building the ground game?

What role did having a monthly newspaper like Substance play in getting the word out to people? It seems like a powerful tool has not been factored in. In terms of where MORE is going with a newsletter – hard copy and expensive – it would be good to have some analysis. Does CORE and other caucuses do monthly hard copy outreach directly to teachers?

How do you challenge for power in a rigged election like we have here? What are the different conditions in different cities and how do we adapt?