MORE has sent the following letter of solidarity along with a monetary donation to support the Dyett hunger strikers in Chicago.

Please post black and white pictures to twitter under the hashtag #FightForDyett to show your solidarity (or email to more@morecaucusnyc.org and we can tweet for you) – below see a few of the MORE members who have done so… 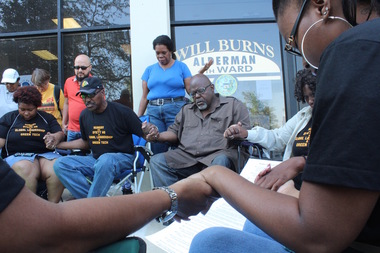 We support the notion that the Dyett school community has a vision and solutions to preserving their public schools. We support the highest moral and ethical stand of putting their basic needs at the same place as their need for democratic decision making. The action of denying themselves basic sustenance to support life is the height to which they’ve reached in protecting their right to public schools their children deserve.

As we send our solidarity, we call on those elected to represent their constituents to stand with their community when the only thing they are demanding is their school.