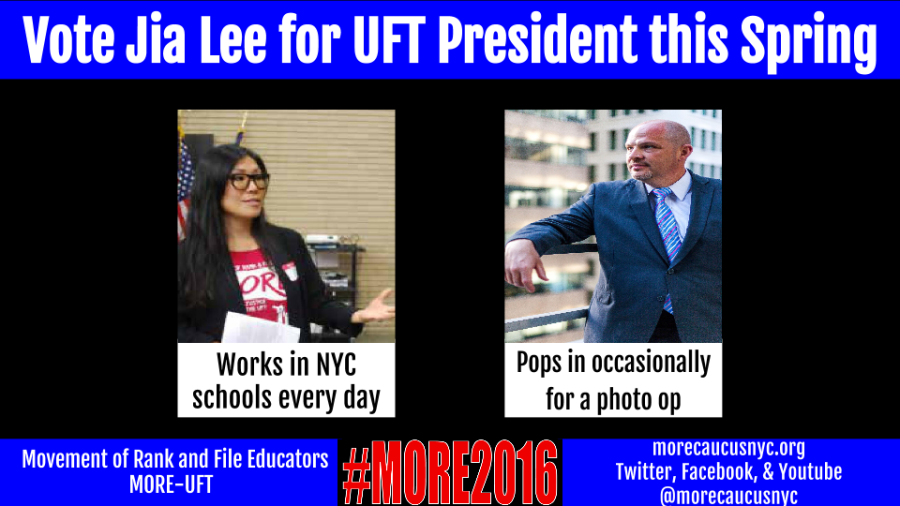 The differences between the two slates running in this year’s UFT election could not be clearer.  The March Delegate Assembly called for Delegates to go on the record twice on where they stand on student assessment results being used as part of teacher evaluations.

MORE-New Action raised a resolution to oppose using student test scores to rate teachers. We also raised an amendment to another resolution to call for repeal of the horrific Education Transformation Act of 2015. On both resolutions, Michael Mulgrew’s Unity Caucus majority at the DA voted yes to high stakes student assessments as part of teacher evaluations and MORE said no. Unity just wants new and improved assessments.

As NYC Educator pointed out in his latest piece, Unity’s shiny new talking point is that they want principals not to have total control over evaluations. This takes real gall when one considers that Unity gave away our right to grieve unfair/inaccurate observations in 2005.  NYC Educator tears apart the Unity argument by simply saying that the old S or U system always placed the burden of proof in teacher dismissal hearings on management to show we were incompetent or had committed misconduct but that under the current law, after two ineffective ratings we are presumed to be incompetent.  We must prove with clear and convincing evidence we are not incompetent.  Our burden is very high indeed. In other words, we are guilty until proven innocent.

Unity claims this isn’t bad because fewer teachers are rated ineffective now compared to how many teachers were rated unsatisfactory in the old system. Student test results actually can help our ratings. They can also hurt them as we pointed out here.  What Mulgrew never says in public is that teachers rated developing have now been brought up on incompetence charges and have been subject to dismissal hearings. Teachers rated developing are also forced to endure the humiliation of Teacher Improvement Plans and there is no way to challenge a developing rating.

Mulgrew did admit once again at the DA that the UFT has to fight like hell with many New York City principals.  He talked about a NYSUT Board of Directors meeting where presidents from smaller union locals who hadn’t had someone rated unsatisfactory in forty years wanted to go back to the old evaluation system.  Mulgrew argued that NYC is different. If we take as a given that our president is right on this, we can agree that there has to be a check on administration put in the evaluation system.

Mulgrew thinks the right fix is to change the tests teachers are evaluated on to some kind of authentic assessment or student portfolios. Is he sure he wants to go down this road with the principals we fight like hell with in New York City?

The idea of alternative assessments sounds great and can work. We would test kids on how well they perform a task rather than on multiple choice exams. The analogy used on the link above was golf. Is it better to test kids by having them play a round of golf and see how they do or to give them a multiple choice test on the sport?  Obviously, the former sounds more authentic but if the kids don’t score a hole in one or at least get on the green fast enough, the teacher gets the blame for the kid being a lousy golfer under Mulgrew’s plan.  What if the student never practiced?  It’s still the teacher’s fault.

I work at Middle College High School, a consortium school.  We use mostly alternative assessments except for the English Regents.  The system works mainly because our Principal Linda Siegmund is very supportive of teachers and students.

If the Department of Education’s principals from hell were put in charge of an authentic assessment program, it would be a total disaster for teachers and students. A devious principal could easily manipulate the system to make sure that teachers who they want to attack have their students saddled with impossible assessments. This has the potential of putting the junk science part of the evaluation system into overdrive.

Who is going to grade the portfolios and other authentic assessments?  Under Governor Andrew Cuomo, I very much doubt the law will allow the teachers of the students we teach to create the assessments or to grade them. There will be insane oversight. This could be a compliance nightmare in many schools. In the end it is still testing. It is still rating teachers on how well kids do on the assessments and does not take into account the outside factors that have much more to do with student achievement than anything we do in school.

Do you think the Department of Education could implement a fair authentic assessment system throughout the New York City school system?

I think we can agree that mandating authentic assessment system-wide might be somewhat more difficult to implement properly than putting astronauts on Mars.  My guess is the Mars trip might happen sooner.

Progressive education can succeed but there is nothing dumber than forcing it down people’s throats as New York City learned in the early Joel Klein years when Diana Lamtried to do just that. If authentic assessment is not mandated, then the alternative is the current unreliable/invalid common core tests, the Regents or other exams that were not designed to rate teachers. We’re right back to junk science square one.

Which leads to this question: What would happen if we repeal the Education Transformation Act of 2015 as well as Education Law 3012c and return to the satisfactory-unsatisfactory evaluation system for teachers?

Right away the system would revert to one mandated observation per year for tenured teachers who have reached salary step 8B and Danielson observations would get thrown into the trash bin of failed educational ideas where they belong.  Would anyone miss the HEIDI rating scale? More importantly, the burden of proof in all dismissal hearings for tenured teachers would shift back to administration. That would put a major check on principal power that we currently do not have.

As for the annual rating being completely back in the hands of the principal, quite simply we could demand in contract negotiations that there be an expeditious process to grieve unfair/inaccurate observation reports and other material placed in our file, including being able to challenge supervisory judgment. Better still, let’s put this process in the law.

The choice is clear in the UFT election: