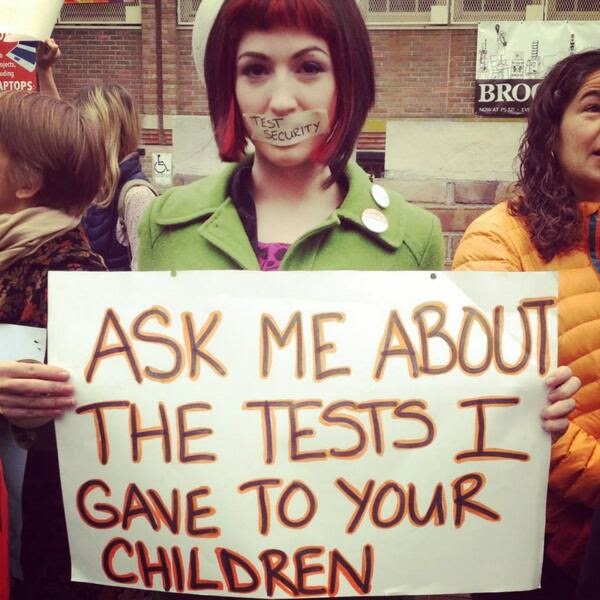 The Movement of Rank and File Educators/UFT

“Can educators share their legitimate concerns about the tests with parents?” an audience member asked District 15 Superintendent, Anita Skopp, on December 9, 2015, at a CEC 15 meeting. She responded, “Teachers do not have a right to speak about how they feel about the tests. They don’t have a right.” New York City public school educators are under a gag order. Last year’s opt out movement had the highest concentrations in suburban districts in Long Island and upstate New York where there was a collaboration of experienced educators with parents and students. It has served to be a catalyst for resistance and change; yet, in New York City, there is a deafening silence.

One of Chancellor Carmen Fariña’s four pillars for supporting NYC public education is, “to engage parents in every aspect of school life.” Yet, for the most consequential issue of high stakes testing, there is to be no engagement between schools and families. The legitimate concerns of educators may never be known. However, some are speaking out in different ways. This is one of hundreds of anonymous posts that can be found on social media.

Many will continue to speak out citing that the consequences to our students and public schools will be greater if we remain silent. Special education teacher and parent, Jia Lee states, “We have a professional and ethical obligation to speak up against the ranking and sorting of our students, teachers and schools.” Lauren Cohen, 5th grade teacher at P.S. 321, has said, “I’m not allowed to discuss, with my students or to their parents, a particular problem or question (from the state tests). In fact, we are told that we are not allowed to look at the test booklets. This is counter to effective teaching and learning, and it renders the test useless.”

“Teachers’ legitimate concerns, based on years of experience and knowledge of developmentally appropriate pedagogy, are absent from the official story that’s being told to NYC parents. This is an attack on our democracy and goes against the so-called critical thinking that the NYCDOE purports to be promoting through Common Core,” states Katie Lapham, English as a New Language teacher and author of the education blog, Critical Classrooms. Parent and special education teacher Vanessa Keller states, “If the tests were at all appropriate, no one would have to opt out. This is truly sad. Our children and teachers deserve better.”

In a private meeting on Thursday, March 24, 2016, Carmen Fariña responded to parent concerns and stated that some students, such as recent immigrants and students with special needs, should probably not take the state tests and should opt out. Teachers are confused. High school social studies teacher, Mike Schirtzer, states, “To say that some students should take the tests and others shouldn’t begs the question of who decides and why. All parents and students have a right to understand that these tests are only being used to label schools as failing. We should be working together to listen to the needs of teachers and parents, rather than stigmatize and set school communities on a path to closure.”

We call on the NYC Department of Education and the leadership of the UFT to guarantee the first amendment rights of NYC public educators. The New York State Union of Teachers, issued an updated FAQ stating, “NYSUT encourages members to exercise their rights as citizens and professionals to speak out against the harmful effects of high-stakes tests in general and to consider refusing the tests for their own children. NYSUT will defend teachers against disciplinary action if a district pursues 3020-a charges.” Yet, in New York City, teachers have been told they do not have a right. In some cases, teachers have been issued internal memos with a clear message that any discussion regarding the tests with parents is subject to insubordination charges.

The Movement of Rank and File Educators (MORE) is the social justice caucus of the UFT running with New Action in the May 2016 UFT Officer elections. Find out more at https://morecaucusnyc.org/