The new UFT-DOE contract makes no change in the 50-year wait for lower class sizes, a fair grievance procedure, and a rational job security process, among other issues. Newer teachers will still have to endure 4 or more years of harassment and hundreds of pages of tenure application paperwork, the DOE and administrators will still have the same ability to skirt the contract while chapter leaders and union members are held accountable for small offenses, and the general class size limits of 34 students in high schools will not budge a bit.

While the UFT should be applauded for negotiating minor improvements in the number of observations, the overall agreement is a readymade rhetorical exercise in the “students first” claims of education “reform” advocates who really just want to cut resources and spending from public schools. Press releases by both the De Blasio administration and the UFT leadership of Michael Mulgrew proclaimed that the tentative collective bargaining agreement goes beyond teachers and workers and instead focuses on improving the work of students in schools.

I, and many other teachers, care equally about learning conditions as we do about working conditions, because we have come to the conclusion that the two, at their core, are symbiotic, if not essentially the same. However, the details of the agreement seem to indicate this potential contract would be a continuing disaster for students, parents, and educators alike. While there are steps towards a more rigorous arbitration process over class size violations, it is unclear how much on-the-ground conditions will change, as administrators are already able to ignore legal limits during pivotal periods early in the year, and all the contract does is shift around some numbers and add more bureaucratic committees of UFT-DOE collaboration.

Notably, there are no reductions in the class size caps for K-12 courses, which run as high as 34 students in general education high school classes and 50 students in music and physical education high school classes. This is despite many assurances to teachers from   UFT leaders that class size was indeed a priority in these contract negotiations. As the Movement of Rank-and-File Educators has predicted for the past year, there was never any real commitment to lowering class size. Union leaders have admitted as much, saying that the city made it clear it wouldn’t be on the bargaining table.

Unfortunately, this is the type of position from which our union decided to bargain, instead of organizing the membership of educators to publicly demand a better contract, as has happened in states all over the country with teacher strikes, or at least strike readiness. The decision was to cave on core issues and assume that the allegedly progressive mayor would give a good deal. Instead, it is a deal riddled with givebacks such as a pay “raise” that doesn’t match inflation, second-tier healthcare for new teachers, prescreening psychological “stress” tests for new teachers, and an increase in remote education programming. 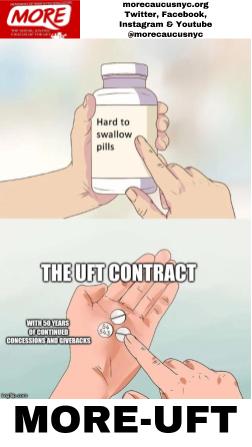 While class size reductions would be a broad programmatic change that could benefit all students, the tentative contract instead includes more of the band-aid measures that have marked the warm 5-year marriage between the UFT and De Blasio, a marriage with a parsimonious attitude towards effective spending on education.

In 2014, the De Blasio administration announced the beginning of the Renewal Schools project, which focused on funneling massive amounts of money, sometimes carelessly, into schools which the city had identified as low-performing. At the time, the UFT applauded the administration as rational and just, as if anything other than big Bloomberg-era austerity cuts and overt charter expansion was a blessing.

In 2018, the UFT and DOE have now announced the so-called “Bronx Plan”, which is similarly a band-aid measure. It focuses on certain struggling schools, claiming to give workers higher pay and more control, but also involving vaguely worded parallel structures to the main collective bargaining agreement,  leaving open threats to the security and solidarity of workers. Further, it does nothing to address the 100,000 NYC school children who are homeless, many of whom live in the Bronx. Nor does it address the 595,000 NYC students who attend overcrowded schools.

The UFT, meanwhile, announced on October 11 that it wanted to convene an emergency session of its Delegate Assembly the next day, in order to recommend this agreement be presented to the overall membership for approval. However, the document was  over 60 pages and most DA members did not have time to adequately review this, let alone work the “emergency” assembly meeting into their schedules. [Why was it an emergency? That’s unclear. The current contract wasn’t going to expire for months.]

The union leadership is attempting to fast-track an agreement that its members are not even familiar with yet, and which lacks any progress on issues such as class size, which is demanded by and benefits teachers, parents, and students alike. At a time when New York’s mayor is a self-proclaimed progressive in the largest city in the country, we should be pushing for a bold contract. The UFT needs to mobilize membership to demand the DOE make a contract that doesn’t include more meager raises and band-aid programmatic changes. Of course, with ballots rushed and due by the end of the month, chances are this conversation and mobilization won’t happen. However, as more rank-and-file members become aware of the lack of democracy and the lack of any real progress in our bargaining agreements with the city, the tides could shift and this wave of apathy could wash away, along with many of our union and city government leaders who lack vision and bold ideas.

Andrew Worthington is an English and special education teacher and the chapter leader at PACE HS in Manhattan.