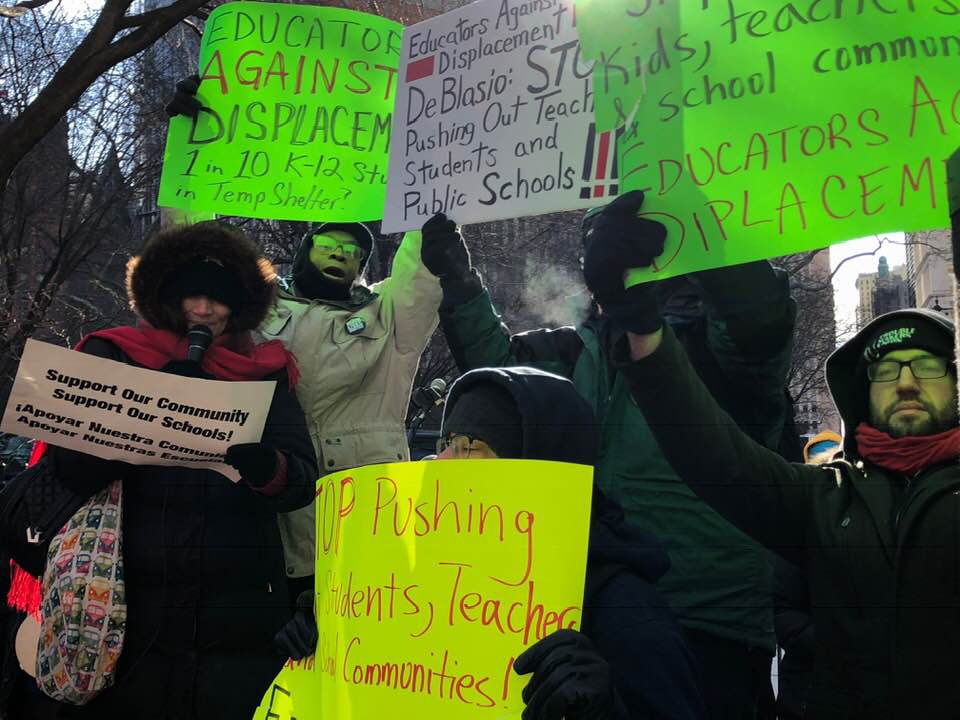 UPDATE: Please sign this petition around demands for COVID-19 relief, coming directly from our activist allies in this work.

(MORE-UFT members and other educators took the stage during a 2019 MLK Day Rally at City-Hall against the four luxury megatowers and in support of the community-formulated Chinatown Working Group Plan which would protect existing housing and expand low-income housing on public land.)

On February 24, 2020,the Lower East Side Organized Neighbors (LESON), a group participating in the Citywide Alliance Against Displacement, of which MORE-UFT is a member, announced a major victory. The New York State Supreme Court decided in favor of the Chinatown and Lower East Side community’s lawsuit to stop the planned development of four luxury mega towers in the Two Bridges area. The plan for the mega-towers had been backed and promoted as a done deal by Mayor De Blasio and local City Council member Margaret Chin, both of whom were endorsed by the UFT during their election campaigns. The megatowers were going to cut off people’s access to air and light; displace communities of color, immigrants, workers and their families; increase traffic; and change the nature of the neighborhood. Nearby landlords would have been incentivized by the rising market value of their property to push out existing tenants. Stores would have jacked up prices with the influx of wealthy residents.

John, Chapter Leader at City-As-School High School and MORE-UFT member, circulated petitions in his union chapter, to DeBlasio and City Council Speaker Corey Johnson calling for them to oppose plans for the towers. He also helped organize “Educators Against Displacement” meetings at the Lower East Side Workers’ Center where MORE-UFT members met with adjuncts, substitutes, students and others who work in education. Some students at John’s school, a transfer school, who live in public housing on the Lower East Side have experienced hardship since a luxury tower replaced a Pathmark they depended on, in 2014. One student, his mother and his siblings, drive all the way to New Jersey to do bulk shopping now. Many beloved bodegas, hair salons, Dominican bakeries, botanicas and bridal shops have all disappeared, replaced by expensive bars, restaurants and boutiques. Four more megatowers would have massively accelerated this ongoing displacement.

Members of MORE-UFT and other educators joined the fight against the towers, turning out at large demonstrations at City Hall, petitioning and leafleting outside Lower Manhattan schools and in union chapters, and door-knocking with community members. Over 5,000 signatures were gathered in a petition against the towers, largely through neighbor-to-neighbor and door-to-door outreach in NYCHA and other building complexes. Last year, MORE-UFT members carried signs that said “Educators Against Displacement” and spoke out at rallies at City Hall about how families in their school communities, mainly low-income Chinese immigrants, Dominicans, Puerto Ricans, and other people of color, are already being displaced.  Karen Arneson, a MORE-UFT member and Elementary Academic Intervention Teacher, highlighted in her speech at a City Hall rally, the way displacement of low-income working people is leading to a decline in the number of students at local public schools, triggering cuts in arts, intervention programs, and staff. MORE-UFT members and other Department of Education employees — full time teachers, substitutes, and custodial staff — have been very active in the organizing that brought this victory, uniting with adjuncts who teach in colleges and professors, along with all kinds of members from the community.  Racist rezoning plans, backed by De Blasio and the City Council, that encourage luxury developments and that fail to defend and expand genuine low income housing, have contributed to making NYC home to the most segregated K-12 public education system in the country, with glaring inequalities experienced by white versus non-white students.

Housing conditions affect everyone. The value of our paycheck is not only determined by the hours we work and the dollar amount we receive, but is relative to the price of housing and other resources we need. As housing costs skyrocket, our paychecks, pensions, and social welfare benefits are worth less. Rising housing costs are like a pay cut:

Anyone who wants to find out more about “Educators Against Displacement” and about connecting their school communities with these organizing efforts can contact MORE-UFT member johnantush@gmail.com.